BERBERE LADY AND HER WATER JAR

During the winter of 1992 I decided to make a trip to South Morocco preceding my journey along the coastline of the Atlantic Ocean, Essaouira, Marrakech, Erfoud and the Merzouga dunes, I decided to visit Zagora which is at the desert gate. After going over the Tichka pass (2260m above sea level), an irresistible stopover had to be made in Ouarzazate which is a town that has hundreds of Ochre Kasbas (mud houses) where many block buster movies have been filmed, such as Indiana Jones, Star Wars & Gladiator. This is the last stretch before the desert.

Passing through the magnificent Draa Valley with its Berber villages Kasbas and Ksours (long, narrow barrel-vaulted rooms developed by the Berbers as a means of storing and protecting grain from the harsh environment and Arab invasions), where they majestically rise from the oasis to the sky.

In this region you can find peasants working the land. Women going to and from the well carrying clay jars on their shoulder, old men  travelling from Cont. below ... 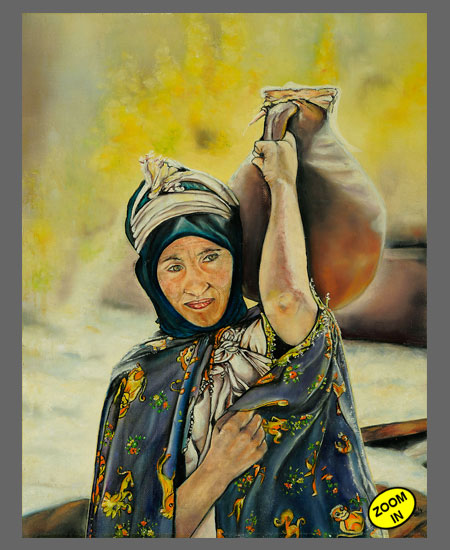 village to village with carriages bringing you a feeling of nostalgia stepping back in time, driven by mules, horses or donkeys where old men ride gently  through the valley waving and smiling pleasantly to strangers passing by.

The most beautiful aspect of this region is the fact that it is untouched by modern society’s pollution, noise and concrete.