2001-2006 Kazakhstan. After five years spent in Bahrain, once more it was time professionally for me, to get moving to another horizon. Very little choice of destinations was available. More by accident I picked on this far-off land which had been suggested to me, even though at the time, I had never really showed any interest in it.

It was autumn and the temperature was really nice in the Gulf. After finishing the usual administrative formalities, I only had a few days to get to this unknown destination. At 3 in the morning, I was welcomed at Almaty airport by my future colleagues. The temperature was -27°C and the snow was crunching under my shoes.

Later I was dropped in front of a building entrance, which was going to lead me to my temporary flat. A dim light bulb barely illuminated the not very clean and shabby staircase with electric wires hanging along the walls. The flat was the last one on the top of the stairs. For a minute I was wondering what I was doing there. The door suddenly opened to a very cosy little flat completely renovated. I heard later, that I was the first tenant. 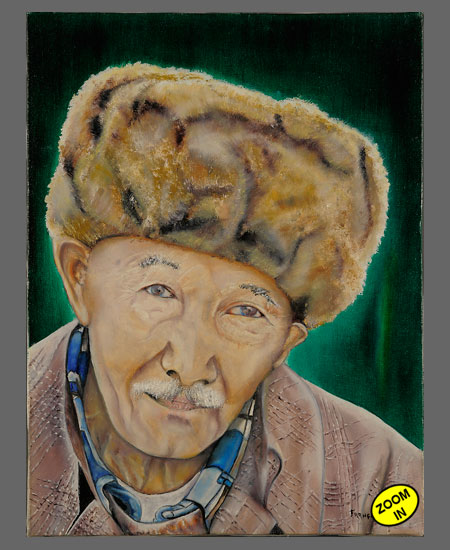 to none, from modern buildings to deteriorated ones, the contrast was huge. The following day I ventured on the virgin snow, where I could only hear the sound of my footsteps. The sky was dark-blue; the snow-flakes hadn’t missed anything even down to the tiniest twigs. I felt that I was part of a life size Christmas card!

Days, weeks and months went by. I was getting familiar with Central Asia where I had so much to learn and where finally I was feeling good. I was working, I had received my own belongings, and I already had friends. Weekends we never stayed indoors, summer like winter the country had so many wonders to discover. Natives were very welcoming, full of rich history. Between their ancestral origins and the soviet period, they were proud to talk about their culture and customs. A world where we could experience the distance, to the South the Tian Shan range standing as a barrier and to the North the immensity of the steppe. I developed a real passion for rural life.

I was regularly going to villages markets, where the heart of the country was beating. The winter was going into the beginning of spring we could perceive the change of season with the arrival of the first fruits and vegetables. I never hesitated mixing with the crowd. After some time I got to know some of the regulars. We didn’t speak the same language but no matter, smiles were saying it all. They were the faithful figures of the markets, without them knowing, I was giving them special attention. Always sitting at the same place, was my little lady and her greens, then my old man with his home made brooms and further up, my “chapka” man fixing all kinds of things. It was the fishmonger bragging about his enormous carps, and hiding behind the hanging meat, the butcher. Dried fruits, beans and various flours were presented in huge jute bags and at the corner of an alley you could find boutiques selling traditional costumes. Whatever the weather, they were always there and for that matter I was too. The sense of great human warmth of this place remains in my memory to this day.